Benjamin Franklin is famous for many things, one of which is the invention of the Franklin Stove. Benjamin did research to discover how to improve fireplaces after realizing that many people were dying every year because of the various hazards of indoor fireplaces. There was also a wood shortage at that time. Ben set out to invent a fireplace that would be safer and more efficient, and he succeeded.

In 1742, at the age of 36, Benjamin invented the original version of the Pennsylvania Fireplace, which eventually came to be known as the Franklin Stove. Franz Kessler was one of the people whose work inspired Ben. Kessler invented an inverted siphon in 1618. He used a baffle, which basically forced fumes into an inverted siphon so that more heat was extracted from the combustion gases, a system that Ben incorporated into his invention. Frenchman Jean Desaguiliers was another of Ben’s inspirations. Ben studied Desaguliers’ experiments which led to the conclusion that metals such as cast iron could be used instead of masonry in a fireplace; and metal provides additional benefits, such as radiating comfortable heat into a room.

The original Pennsylvania Fireplace was a freestanding cast-iron fireplace, and it was designed to be inserted into an existing fireplace. Ben’s design was successful in that it made fireplaces safer and more efficient. There was a major flaw, however. Ben designed it so that smoke came out from the bottom of the fireplace. The stove was unable to work properly because smoke rises. In spite of the fact that improvements were obviously needed, the invention was being widely used. Benjamin was offered a patent on the Franklin Stove. Ben refused, however, to patent the popular invention. He selflessly wanted the design to benefit others, and he wanted other inventors to freely improve on his work. In his writings, Benjamin said that he considered providing the stoves as a service to be better than any financial rewards he may have received.

Benjamin’s design was improved upon by others, including David R. Rittenhouse. Rittenhouse added an L-shaped chimney, and he called his improved appliance a Rittenhouse Stove in the late 1780’s. But his design was known then as the Franklin Stove, and it still is today. 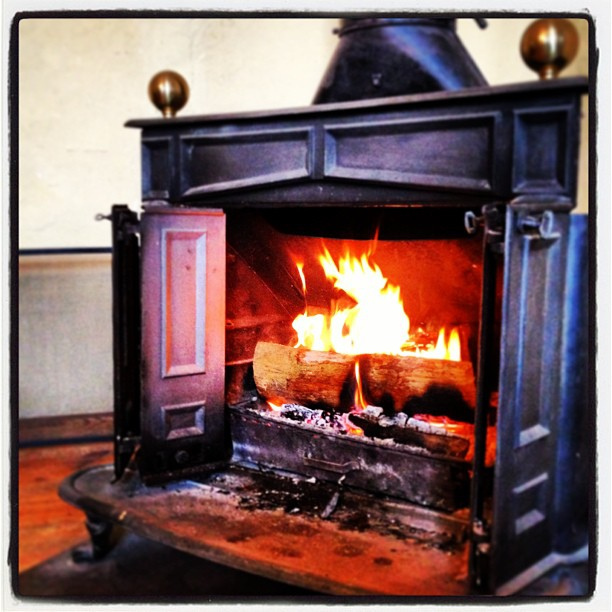 Many people still use Franklin Stoves, but that doesn’t mean there has been no progress in the design of fireplaces. In that past two centuries, there have been many improvements. Modern wood burning stoves, fireplaces, and fireplace inserts are highly efficient and can’t reasonably be compared to earlier versions, as far as performance.

Benjamin Franklin, one of the Founding Fathers of our nation, was and is widely recognized as a genius. His inventions and remarkable achievements are numerous. Benjamin’s contributions toward greater fireplace safety saved countless lives. He even organized the first fire stations in Pennsylvania in 1736 because of the dangerous threat of fires at the time. Of all that he is justifiably credited with accomplishing, we especially appreciate the invention of the Franklin Stove.